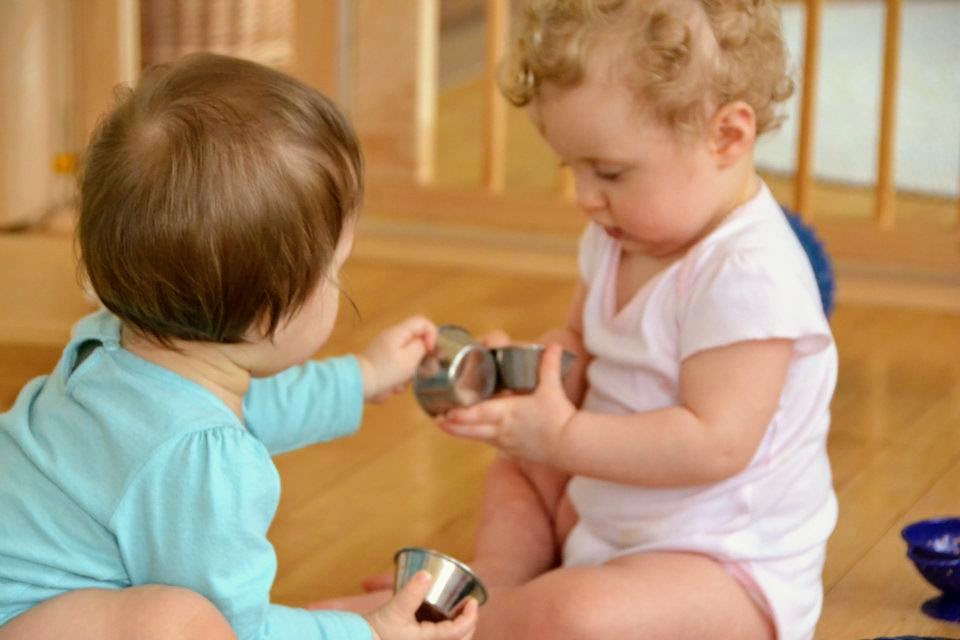 When our play group gets together, none of our 13-18 month old children seem to be able to share toys. It doesn’t matter whose toy it is: whichever baby has it at a given moment will simply refuse to let another child have it. We all want our children to grow up to be generous, caring people. How can we help them learn to share? Playgroup Parents

Before a child can learn to share, she needs to go through certain stages of development. In the beginning an infant perceives herself, not as separate, but as part of the world she feels, touches, tastes, sees and hears. Slowly an awareness that there is a world outside, that there is a “Me” and a “non-Me” emerges. Later she realizes that there are differences in people, there is a “mommy” and a “not mommy”, there are familiar and unfamiliar people and objects. At this stage when a child holds or even just wants an object in her mind it is “hers”. The child doesn’t yet have the concept of ownership.

Sharing is based on the knowledge of ownership and use. The owner lets someone else use an object with the knowledge that it will be returned later. But the infant also has no concept of time. Only “now” exists. Even two minutes may seem like forever. We cannot expect a young child to perceive what sharing means.

If we expect a behavior from our children that they are not ready for or don’t understand, they may be able to learn to do what we ask, but it will be done because they feel parental pressure, or from a desire for parental approval, or out of fear of punishment. Personality characteristics such as generosity, empathy, caring and sharing cannot be taught, they can only be modeled. Growing up in a family where parents share not only objects, but also time and attention, will help a child to develop these personality traits.

There are certain behaviors, however, that we can expect. If your child is hurting another child, for example, you should be firm. You are in charge, and can not allow any child to hurt another. If you have a group of two or more young children (up to six toddlers– more than this will make a crowd who cannot be expected to enjoy each other’s company), you should have several of the same toys available. Of course, a child will always want the truck that the other child is playing with because it is moving, it is alive. If a conflict or fight does develop, there are some steps you can follow.

First, move peacefully, stay close and wait patiently, the children may be able to handle it themselves. If the children are “fighting” without harming each other, it is good practice for them and they should be allowed to continue.

You could then state the conflict in a non-judgmental way, be neutral and impartial, and make a comment such as, “Both you Andrea and you Jason want the same truck.” This helps calm the children by letting them know that they are being understood and empathized with.

If they are still in conflict, look around the room and ask the children if they see another toy they would like to play with. You may pick it up and start playing with the toy yourself. This may make it attractive to the toddler.

If the fight keeps on, you may choose to intervene more directly. You might want to change the routine and put the toy in question away. In other words, you become the problem solver, instead of letting the children solve their own problem.

Following the RIE approach, we start with the least amount of help and intervention, and then slowly increase it. We do expect and trust that even infants learn most by working out conflicts all by themselves.