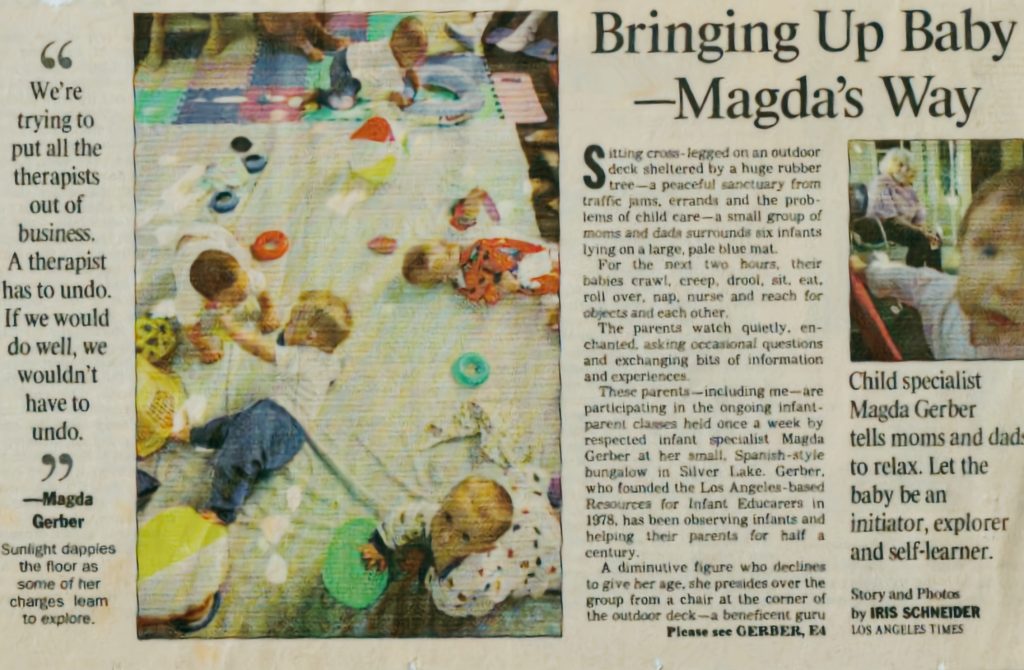 BRINGING UP BABY — MAGDA’S WAY: Child specialist Magda Gerber tells moms and dads to relax. Let the baby be an initiator, explorer and self-learner.  Story and photos by Iris Schneider

Sitting cross-legged on an outdoor deck sheltered by a huge rubber tree–a peaceful sanctuary from traffic jams, errands and the problems of child care–a small group of moms and dads surrounds six infants lying on a large, pale blue mat.

For the next two hours, their babies crawl, creep, drool, sit, eat, roll over, nap, nurse and reach for objects and each other.

These parents–including me–are participating in the ongoing infant-parent classes held once a week by respected infant specialist Magda Gerber at her small, Spanish-style bungalow in Silver Lake. Gerber, who founded the Los Angeles-based Resources for Infant Educarers in 1978, has been observing infants and helping their parents for half a century.

A diminutive figure who declines to give her age, she presides over the group from a chair at the corner of the outdoor deck–a beneficent guru whose bright eyes and white hair reflect the dappled sunlight.

Gerber says good parenting begins with respect for the feelings and individuality of the child, no matter how young. “Respect is not one of the things people associate with children,” she says. “They don’t consider them people yet.”

Her approach rejects organized play and fancy toys, trusting the infant to be an initiator, explorer and self-learner. “Our goal is an authentic child–one who feels secure, autonomous and competent,” Gerber says. She believes that once these skills are attained, the child is set on the right course for a life of creative and confident problem-solving.

But Gerber also wants to ease the stress of parenting. Often, she says, parents try too hard to be everything to their children.

“I try to get them to let go,” she says. “If you always do what the child wants, it’s not good. A child wants a 24-hour slave for the first six or seven years. Then they accept a little reality. Then they want you out of their life and never need you again. Parenting is an ongoing letting go. We try to make it easier.”

Gerber has focused on the well-being of the whole family since the start of her career, long before many other child development experts spoke out about the importance of that facet of child care, say those familiar with her work. This vision has earned the respect of her peers.

“Any kind of child care that will really serve the child has to serve the parents,” says Boston pediatrician and author T. Berry Brazelton. “Magda has that dedication to the whole family when working with children.”

Even though her house is often filled with kids, there is an aura of calm inside. Much of that emanates from Gerber herself, who works with groups of infants from birth to 2 years with wisdom, humor and authority. Her classes end at age 2, when–she hopes–good patterns for problem-solving will have already been established. Gerber began her career in child development in the 1940s in her native Budapest, Hungary, when her third child had a visit from a new pediatrician, Dr. Emmi Pikler. The doctor’s respectful approach to her young patient struck a chord in Gerber, who went back to school to study child development with Pikler.

She worked closely with the renowned pediatrician at an orphanage Pikler founded to create an environment that would allow the children to flourish despite the institutional setting.

Among Pikler’s revolutionary concepts was the idea of making care-giving time (diapering, feeding, dressing, bathing) the time for intimate interaction and for teaching such essential skills as listening, cooperating and participating. (Gerber later dubbed this educaring .) Pikler also encouraged caregivers to observe rather than intrude on the children in their care, and to allow the infants the time and space to explore unimpeded.

In 1957, Gerber and her family fled the dangerous political conditions in her country, leaving behind a life of luxury and arriving in the United States to begin again.

She used her training in psychology and child care and began working with older children afflicted with cerebral palsy. But she soon realized that her real passion was the very young. After helping to run an infant-parent program in Northern California, Gerber expanded on Pikler’s theories and 16 years ago created Resources for Infant Educarers (shortened to RIE and pronounced wry .)

In addition to the child-parent classes she leads, she holds classes in Silver Lake for RIE trainees from all over the world, teaches early child development at Pacific Oaks College in Pasadena, and lectures and consults nationally and internationally on child-care issues.

Renatta Cooper, a faculty member at Pacific Oaks College who specializes in early childhood education, calls Gerber the main practicing theorist on issues of infant education and laments the fact that her classes aren’t available to a more diverse ethnic and economic group.

“I think there’s a lot of people who could benefit from RIE,” Cooper says, “particularly the high-risk population. . . . It says something about how we value parent education, infants and family support that a program like this is only available for people with money and access.”

RIE, which gets no subsidies or funding beyond tuition and Gerber’s speaking fees, plans to offer limited scholarships to try to reach a more diverse audience. An eight-week session costs $190.

“The genius of Magda,” says Elizabeth Memel, an early childhood educator who runs a RIE program on the Westside, “is that she took the principles of (Pikler’s orphanage) and made them fit for family consumption.”

“We’re trying to put all the therapists out of business,” Gerber says. “A therapist has to undo. If we would do well, we wouldn’t have to undo.”

To any ‘90s parent who has been to a toy store, the RIE philosophy can seem either totally austere or like a breath of fresh air. Gerber eschews the toys and playthings that fill many nurseries. Her tools are mostly simple household objects, such as plastic bottles and colanders, colorful cardboard candy boxes, large cartons and patterned cloth napkins.

There are no development charts telling parents when a child will sit or stand. Babies are not pulled into sitting positions or propped up with pillows before they can sit up by themselves. No RIE caregiver would be caught helping a child to walk before the child gets up and walks on its own. Gerber also dislikes highchairs, maintaining that a child should be fed on the parent’s lap until it is old enough to sit at a small table.

Instead of taking an infant to the market, Gerber suggests finding a neighbor to stay with the child. For the first three months of life, Gerber believes that staying at home provides more than enough stimulation for a child.

Sometimes, parents admit that RIE’s guidelines can overwhelm them. “Halfway through the program, I was very anxious,” says mom Elizabeth Margolis. “I thought maybe in (Hungary) you have the kind of support system Magda talks about, but not in West Hollywood. . . . Her suggestions are goals to reach for. We don’t live in the nirvana kind of environment Magda wants for us. But I do the best I can in our little West Hollywood apartment.”

For Gerber, the best interplay between parent and child is never initiated by the adult. Staying in the background enables the parent to look for cues from the child if they need or want help. If those signs aren’t present, Gerber’s advice is to watch and wait. Even if two youngsters seem headed for conflict, Gerber would urge parents to let the children work it out, unless it seems that someone is about to be hurt.

During class, almost every question leads to a tale. A query on childproofing sets Gerber off on a story about how one mother-to-be wanted to pad the walls and carpet the floor of her child’s room, thinking she could protect the child from the pain of life’s falls and scrapes.

“Learning to suffer, that’s called life,” Gerber says. “Children are always finding out about reality.” She believes that it is wrong–and even misleading–to try to shield a child from all pain, and that learning to deal with pain and disappointment are valuable keys to living a full life.

Gerber knows this isn’t easy for parents. “A cry goes straight to the heart,” she says, “and it’s meant to.”

At RIE, communication begins before children can talk. “People don’t talk normally to children because they don’t respond,” Gerber says. “We tell mothers to talk to their newborns. They won’t talk back, but one day it will pay back.”

Through observing, Gerber helps parents be with their children in a very different way. She calls it “wants-nothing quality time,” the time when the parent is totally there–not reading the paper, not teaching, not wanting to play or have the child perform, but simply there without judgment, ready and willing to assist the child if needed, but also willing to be on the sidelines while the child explores.

“The secret is balance–to say, ‘When I’m with you, I’m fully with you.’ Many parents give their children half their attention a lot of the time, but never full attention. I cannot stand it when a mother is on the phone and chats with the child. Better to go into another room. The child won’t like it, but there is no way to always please your child. It’s more important for a child to learn who that parent is, and that sometimes she is more accessible than other times.”

And Gerber has a different attitude about the crying baby: “It’s OK for children to cry. It’s healthy.”

She added, only half-jokingly: “They won’t have to go to primal scream therapy.”