Maverick In the Nursery 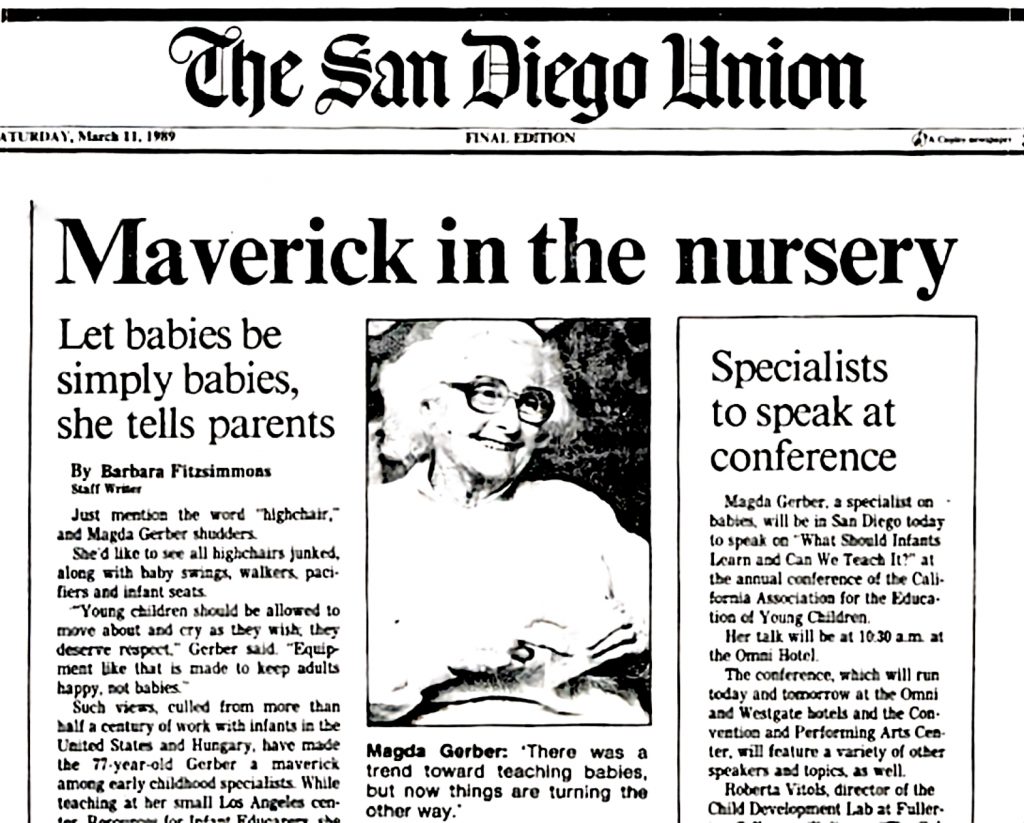 MAVERICK IN THE NURSERY by Barbara Fitzsimmons, Staff Writer

She’d like to see all highchairs junked, along with baby swings, walkers, pacifiers, and infant seats.

“Young children should be allowed to move about and cry as they wish; they deserve respect,” Gerber said. “Equipment like that is made to keep adults happy, not babies.”

Such views, culled from more than half a century of work with infants in the United States and Hungary, have made the 77-year-old Gerber a maverick among early childhood specialists. While teaching at her small Los Angeles center, Resources for Infant Educarers, she has often felt “I was up against an entire culture.”

In recent years, however, Gerber’s philosophies have gone from being “different” to being “in.”

Last year alone, hundreds of parents and educators from as far away as Alaska and New York traveled to the Los Angeles center for classes on everything from changing diapers to choosing toys.

Gerber herself (who has no relation to the baby-food company) is in demand on the national lecture circuit. She will be in San Diego today to speak on “What Should Infants Learn and Can We Teach It?” at the annual conference of the California Association for the Education of Young Children.

Magda Gerber: ‘There was a trend toward teaching babies, but now things are turning the other way.’

In addition, her center has become the training center for day-care providers who work with babies.

In an age when baby boomers are having children and often leaving them in daycare, there is growing interest in how to bring up babies.

“There has been a feeling that you should just know how to care for a baby, but that isn’t true,” said Doris Lipska, an instructor at Mulberry Children’s Center in San Marcos. “In my experience, the younger the child, the more a person has to know about child development. Magda Gerber has contributed a great deal to the field.”

Anita Garaway, director of the Great Pacific Child Development Center in Ventura, agreed. “We send all our infant people to RIE. They really get a lot from her classes.”

In fact, the center’s students receive a strong dose of what’s right and wrong in terms of respect for infants. According to Gerber, a child who is treated considerately grows up secure, competent, resourceful and attentive.

According to Gerber, infants would fare better if allowed to “sleep when sleepy, eat when hungry, cry when upset, and play and explore without being unnecessarily interrupted.”

Elaborate baby toys and games are frustrating and should be avoided, Gerber said. Infants learn more from their natural surroundings and everyday contacts with their caregivers.

Indeed, diapering can be one of the most inspiring times of the day for both baby and adult; Gerber has devoted a whole chapter in her training manual to the experience.

“As you diaper, allow your infant to follow and become involved in the process,” the manual reads. “Allow him to make eye contact, study your face, vocalize, initiate play, follow your actions and respond to you and you to him.”

The doctrine grew from Gerber’s work many years ago with a Hungarian pediatrician named Emmi Pikler who she had turned to for help with her own three children. Pikler was founder of the National Methodological Institute for Infant Care and Education at Loczy and spent years working with orphan babies being cared for in institutional settings.

Gerber came to the United States as a refugee in 1957. She settled in Los Angeles in 1959 and began working with infants in various hospital programs in that city shortly thereafter. In the 1970s, she participated in a federally funded infant study program at Stanford University, then came back to Los Angeles to start her center.

As for young babies being placed in daycare, Gerber has no problem with it as long as their caregivers are consistent and well trained in infant development.

“A lot of people seem to be hung up on the adult-to-child ratio at daycare centers,” she said. “I worry less about numbers and more about training.”

She feels the center’s training would be best, of course. But does it really make a difference in the long run?

Elizabeth Memel, a graduate student at Pacific Oaks College, is conducting a study to find out. She is observing preschool-age children whose parents or caregivers have received Gerber’s type of training and those who haven’t to see how both groups of children interact at home and at school.

“So far, I’ve seen families who have much easier interactions because the parents are able to empathize with a child’s development,” Memel said.

Such positive attention for her program has surprised Gerber. “I didn’t think we’d ever get big,” she said. “But there seems to be a great demand for what we are saying. There was a trend toward teaching babies, but now things are turning the other way.”

She couldn’t be happier. She’d like all parents and caregivers to know that if they simply relax and allow babies to develop naturally, everyone will be better off.

She said, “Nature created infants so perfect, they go through everything they need to go through without help.”

Magda Gerber emphasizes infants should be treated with respect. But how does one convey respect to a little cherub? She has a number of specific do’s and don’ts for parents and daycare providers:

Highchairs. “How would you feel being trapped in a high, dangerous place every time you wanted to eat?” Gerber asks. A child-sized table and chairs are preferable, with a rule that the child can move away, but food must remain at the table.

Baby swings. “They put a baby into an altered state and interfere with his problem-solving abilities,” Gerber says. Don’t use them.

Walkers. “When the child is ready to walk, he will walk,” says Gerber. “These devices have nothing to do with walking and put a child in a very unnatural position.”

Pacifiers. “At RIE, we never do anything to stop a child from crying,” says Gerber. “When children are upset, they need to cry. It will save money on primal-scream therapy years later.”

Infant seats. They should be banned. “A baby should be given space and allowed to move as he wishes,” says Gerber.

Toilet training. “Every child in this culture learns how to use the toilet when he’s ready,” says Gerber. As for those who advocate toilet training in less than a day: “They’re insane.”

Specialists to speak at conference

Magda Gerber, a specialist on babies, will be in San Diego today to speak on “What Should Infants Learn and Can We Teach It?” at the annual conference of the California Association for the Education of Young Children. Her talk will be at 10:30 a.m. at the Omni Hotel.

The conference, which will run today and tomorrow at the Omni and Westgate hotels and the Convention and Performing Arts Center, will feature a variety of other speakers and topics, as well.

Roberta Vitols, director of the Child Development Lab at Fullerton College, will discuss “The Goldilocks Effect: Culture and Self-Esteem” at 1:30 p.m. today at the performing arts center.

“Playground Expertise” will be covered by a Manhattan Beach child-care specialist, Dianna Bernard, at 1:30 p.m. today at the Westgate Hotel.

Other conference subjects will include “Ways to Get Children Hooked on Books,” “Peace Education,” “Play Power,” “Preschool Science” and “Playdough is Educational.”

Registration is at the Convention and Performing Arts Center.