Everybody’s talking about her. This graceful, diminutive little woman from Hungary, Madge Gerber. Her title is almost taller than she is. Infant Specialist, Associate Director of the Children’s Health Council in Palo Alto, Calif. And Associate of Dr. Emmi Pikler at the National Methodological Institute for Infant Care and Education (Loczy, Budapest).

About eight of us women have been fortunate to be getting some very special insight into the best ways — usually the simplest — to live with our children. Once a week we meet in the playroom and yard of one of the women and take part in two child-mother observation classes (one for babies, one for toddlers) with Madge at the helm. There is a two-way mirror in the playroom where we can sit in the little observation room and see our children — sometimes for the first time.

It has been quite an adventure for us and we’ve been feeling so good — so full — that we feel we can’t hoard this amazing woman. We must share her with you. We really feel that if our children were raised with the Madge Gerber influence, we couldn’t help but produce a far gentler, kinder, more optimistic, and independently together bunch of adults. What we plan to do is compile our notes and share them with you in this regular column. If you find that you want to hear more — that you have questions you’d like to ask Madge Gerber, then write to her through me, Cara Wilson, c/o After Birth, and Madge will answer you either through this continuing series or personally. 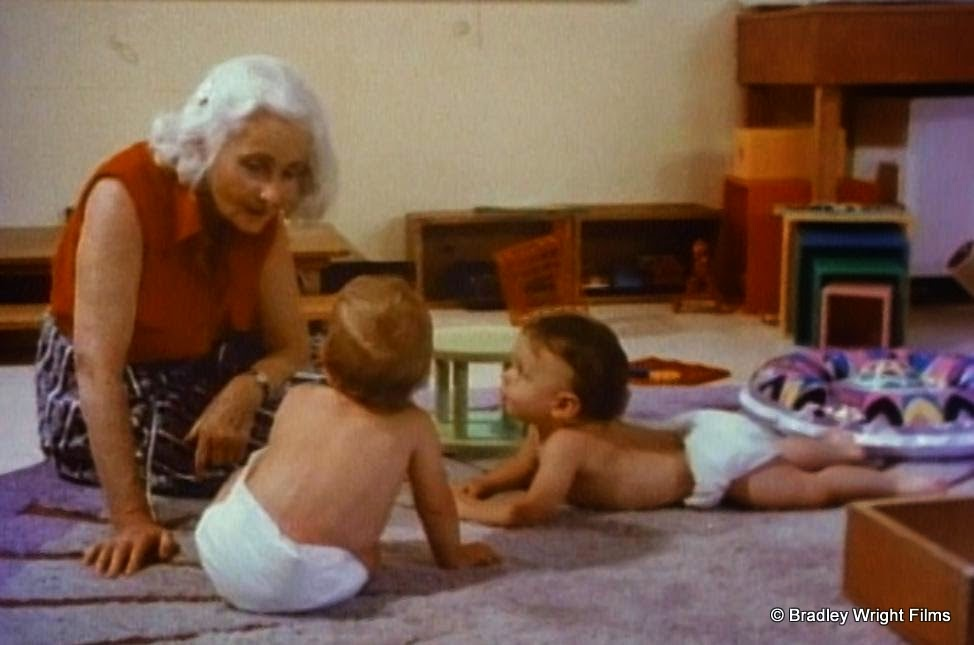 So now settle down, open your mind, and don’t start panicking. You can put her gentle philosophy to work today. Even if you were nowhere near it yesterday. We did. And we are. And we find that Madge Gerber fits into our lives without us having to do that much redecorating. She is 100% in the child’s corner. She sees the child as a human being and guides us to allow that beingness to grow to its fullest potential. Here are some of the highlights from the past few months.

Everything Madge talks about always comes back to the child’s point of view. The child’s feelings. When you pick up your baby, first tell him what you plan to do. And when you want to put him down, tell him that, too. Simple, yes? But, don’t we usually do a lot of grabbing them here and plopping them down there like they were little dolls – loveable, but empty-headed? The same goes for dressing then, i.e.. “Okay, let’s put your right hand in one sleeve, and now your left, etc., etc.” Talk to your child as if you are having a conversation with him. Include him in the ritual you have created around him. Help him to feel he has a thinking, feeling part of whatever you are doing to him and for him. Madge talks to our children with such dignity. She never baby-talks them. Never talks down to them. Treats them all — from infants to toddlers — with such respect. Respect for the child is the key to understanding Madge’s philosophy. Because what happens when you respect someone is you put a little distance between you both. And that distance sets the two of you apart from each other — SO that you can see each other more clearly.

Allow the child to experience conflicts and let him be active in them. Any problem that the child can handle by himself is good. So let him take the initiative as much as possible. EXAMPLE: Madge moves the box where Daniel’s truck has rolled. She doesn’t hand him the truck. She lets him discover where it is, he sees it behind the box, crawls over to it, and feels proud that he found it.

EXAMPLE: To an older child you direct him in a questioning way so that he can solve the problem by himself and, consequently, learn to trust his own ability. So it’s not “There’s the ball over there.” But rather, “Where is the ball? Do you think it’s over there? Where do you think it is? lnclude him in the problem and in the solution.

EXAMPLE: The crying child is not instantly retrieved (if it’s obviously not an emergency, but rather the mother remains calmly, peacefully in the child’s view, her face not a mirror of his pain, but one of strength and solace. The crying child crawls or walks over to mother. She let him experience pain — sorrow —- without grabbing it away from him — and he was allowed to choose when he wanted her comfort.

Try to hold back as much as possible before intervening with two fighting children. And then when you must help, try not to interpret their feelings. You verbally reflect what you see. Reflect. Madge uses that word a lot. It’s really another form of keeping your distance and seeing things more clearly. And not imposing your opinions or emotions. So, when the fighting, let’s say, involves two angry children (old enough to understand and respond to verbalization) both pulling at the same toy, you simply restate the conflict as you see it. “I see you both want that toy. Steve, you want it. Paul, you want it, too. Let’s be gentle. Let’s not hurt each other.” (These are my words — my interpretation of what I’ve learned from Madge.) by stating the problem and not imposing any value judgments, you give both children the feeling that you really understand where they’re at. All the time you are speaking with the “aggressor” you are being gentle to him. You are stroking his face. his hands — holding him. If it made you furious to see him biting or pulling hair or beating up on the other child, let him know it, but then don’t bombard his aggression with your own aggression. An angry response by you would simply reinforce or teach more aggression. So, at the same time you are gently calming the “aggressor” you are equally calming the victim.” But don’t overdo your sympathy to him. Let him know you’re sorry he’s unhappy, see that he’s not broken anywhere, and get him back on his feet. Too much sorrow and fussing over a “victim” makes him enjoy being victimized. This gentle approach to handling a screaming “fur-flying” moment works on babies, too. They might not understand all the words. but by saying “gentle-gentle” and stroking those poking, pinching, pulling little hands, the message gets through. Your peaceful attitude calms things down. And by physically being gentle, the child learns what gentle means. We’ve all tried this approach and find after repeated doses of it, we see that it does, indeed, work.

Choices. They should be in a child’s life as much as possible but must be true choices. EXAMPLE: “Banana, cheese, or apple with your juice?” That is a true choice. You are prepared to give him what he wants. A false choice is “Would you like to go to the market now?” When you know your child has to go with you. He doesn’t really have a choice and that’s deception.

Orders. They can be very good. Give the child simple, uncomplicated, direct statements. “I don’t want you to go outside the gate.” No long explanations are necessary. Simple “I” orders – Orders using your own self as an expression of your desires “I” want this — I don’t want that, etc., etc., these are enough for the child and are easy to understand,

Food. Give the child less than what he wants so he’ll ask for more. This way, he can ask three, four, ten times for more food – he will be eating as much as he wants, not as much as you want. Always keep a positive approach to food. Don’t push him to eat more than he wants, after all, he’s not eating to please you, and he shouldn’t be made to feel that way. This “ask-for-more” approach satisfies both child and mother. Child feels totally in control of what he wants to eat, and mother is thrilled with his many requests. You are helping him to enjoy food and the whole ritual of mealtime and he’s making you soooo happy!

And there is more. Much, much more. It’s so frustrating because I want to tell you everything now! But that will be the joy of doing this column. As we women learn from Madge, I will pass on our insights to you. And we can grow together. My little nine-month-old is now no longer eating plants and sampling ashes out of the fireplace, thanks to Ms. Gerber. Right now, he’s in his own gated play area, happily playing within his own territory. We are free from each other for a little while and he only cries out when he’s hungry or tired or his two-and-a-half-year-old brother is throwing blocks at him. But that’s another story.

Write to me. And I’ll act as a mediator between you and Madge. This could be the start of something BIG!

(1) – Note: Magda Gerber’s name was Americanized when she came to the USA. She reclaimed her “real” name Magda a few years after the After Birth articles were published.