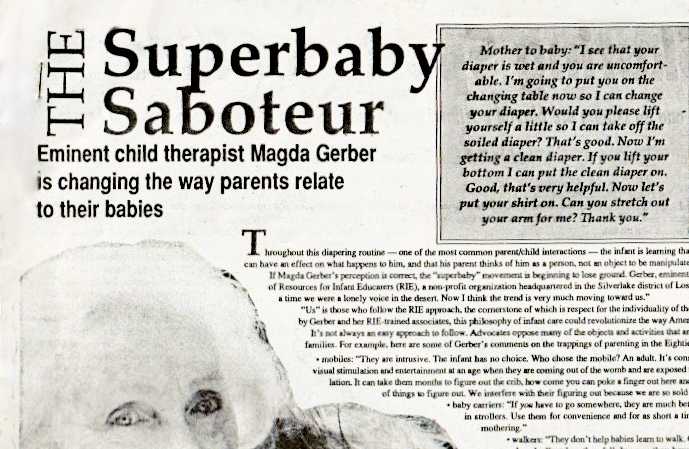 THE SUPERBABY SABOTEUR by Susan Perry

Mother to baby: “I see that your diaper is wet and you are uncomfortable. I’m going to put you on the changing table now so I can change your diaper. Would you please lift yourself a little so I can take off the soiled diaper? That’s good. Now I’m getting a clean diaper. If you lift your bottom I can put the clean diaper on Good, that’s very helpful. Now let’s put your shirt on. Can you stretch out your arm for me? Thank you.”

Throughout this diapering routine — one of the most common parent/child interactions — the infant is learning that his feelings count, that he can have an effect on what happens to him, and that his parent thinks of him as a person, not an object to be manipulated.

If Magda Gerber’s perception is correct, the “superbaby” movement is beginning to lose ground. Gerber, eminent child therapist and founder of Resources for Infant Educarers (RIE), a non-profit organization headquartered in the Silverlake district of Los Angeles, says, “There was a time we were a lonely voice in the desert. Now I think the trend is very much moving toward us.” “Us” is those who follow the RIE approach, the cornerstone of which is respect for the individuality of the child. The way it is taught by Gerber and her fellow RIE-trained associates, this philosophy of infant care could revolutionize the way Americans relate to their infants. It’s not always an easy approach to follow. Advocates oppose many of the objects and activities that are taken for granted by most families. for example, here are some of Gerber’s comments on the trappings of parenting in the Eighties:

However, the RIE approach claims to turn out children who are the epitome of “super:” alert, attentive, aware, focused, and open to learning. And, the theory goes, since their needs are recognized, their right to feelings never denied and their natural drive toward independent mastery of self and environment unfrustrated, these children develop healthy self-esteem.

According to their brochure, “RIE encourages basic trust in the child to be an initiator, an explorer, and a self-learner.” This translates into allowing children genuine choices whenever possible; giving them uninterrupted time for play; and a safe, challenging, and nurturing environment in which to explore.

Observation on the part of the parent is crucial to the system. “If we learn only one word, it is ‘wait’, says Gerber. “Because if the child can resolve their own discomfort, it is so much better than if somebody rescues you out of it.”

Because the RIE approach is at the same time so simple and so far removed from the way most of us were raised, you must see it in action to fully grasp it. Classes of no more than six children meet one morning a week for eight weeks, on an ongoing basis. Children are loosely grouped by age and stage of development, and parents are always present. Classes have one or two volunteer RIE-trained demonstrators, and Gerber attends many of the sessions herself.

On a recent Wednesday morning, in a bright, clean playroom in a residential duplex, six infants, from 2 1/2 to 4 months old, lay in a circle on a large blanket on the floor. Five were on their backs, one on her stomach. Six mothers and a father sat, mostly cross-legged, within arm’s reach of their babies.

Suddenly, one of the infants began crying. No one panicked, no one hurried to pick up the complainer. Instead, a mother reached out, touched her child, and said, “you seem to want something. I just fed you, so you can’t be hungry. Are you uncomfortable?” Soon the infant was quiet again, looking alertly to the right and left.

According to Carol Pinto, who has completed RIE training, and whose daughter Rachel was in Gerber’s first class 19 years ago, most people interfere with their baby’s natural movements. “I know I did,” she says. “Learning the RIE approach is a very gradual process. Once you internalize a little bit, then you carry that little bit with you.”

Sydney Harris has been making the hour-and-a-half drive from Ventura since her son Samuel was only a month old. Gerber and the class came highly recommended by a friend who attended with her son.

“Watching my friend’s little boy was convincing,” she says. “He’s a very special child, very curious and active, but not hyper or out of control.”

As children mature and can make more active choices about their own activities, the RIE attitude respects those choices whenever possible. At a Tuesday class,  parents “watch” Pat, a RIE demonstrator, play ball with Sarah, who is almost 2.

Sarah picks up a ball and tosses it in the general direction of the adult. Kneeling at a child level, Pat reaches out for it as it rolls by and says, “Oh, you want me to catch the ball? Now I have it. Would you like me to throw it back to you?” The child nods and Pat tosses it gently across the three feet of space separating them. Sarah makes a gleeful sound and grabs the ball after it bounces. She throws it again, same response from Pat. Again, and again. Then, when Pat is holding the ball and asking if she should throw it again, Sarah comes up to her and takes it from her hand, and toddles off.

The children experience an unusually low level of frustration here, and so it is not unusual for an hour or two to pass without a cry or whine from the 1 1/2-to 2-year-old group. But this is definitely not permissiveness, since there are a few rules that are carefully enforced. In particular, no one is allowed to physically hurt another.

White-haired Gerber, who won’t divulge her age, has a faintly elegant manner, reminiscent of the wealthy, privileged youth in pre-war Hungary. Her husband, to whom she ‘was married forever,” died a year ago, and she suffered a heart attack last August. Still, she continues to accept invitations from all over the country to speak about the program’s philosophy. She is currently working on the script for a new videotape showing the RIE program in action.

Dr. Emmi Pikler, founder of the now-famous Loczy Institute (since renamed the Emmi Pikler Institute) in Hungary developed the RIE approach to child development. In 1946, Pikler proved that even infants raised in an orphanage can thrive if reared with respect and the right kind of caring environment.

Gerber first met Pikler in the early Forties when the latter acted as pediatrician for one of Gerber’s daughters (she has two grown daughters and a son). Pikler’s unusually respectful approach to the child struck Gerber with life-changing force. “I didn’t know what I needed [then], but that profound experience was what I was waiting for.”

Later, Gerber took classes from Pikler and obtained a degree in infancy and early childhood education. And spent the next 40 years or so fomenting a revolution.

“I had very good parents as far as I remember,” she concludes, “but I’m absolutely sure that my main motivation to do this must be that I have a screaming, crying infant in me who wants to make it good.”