Off Again, On Again

What is Appropriate Curriculum for Infants and Toddlers?

Piagetian Theory and the RIE Approach 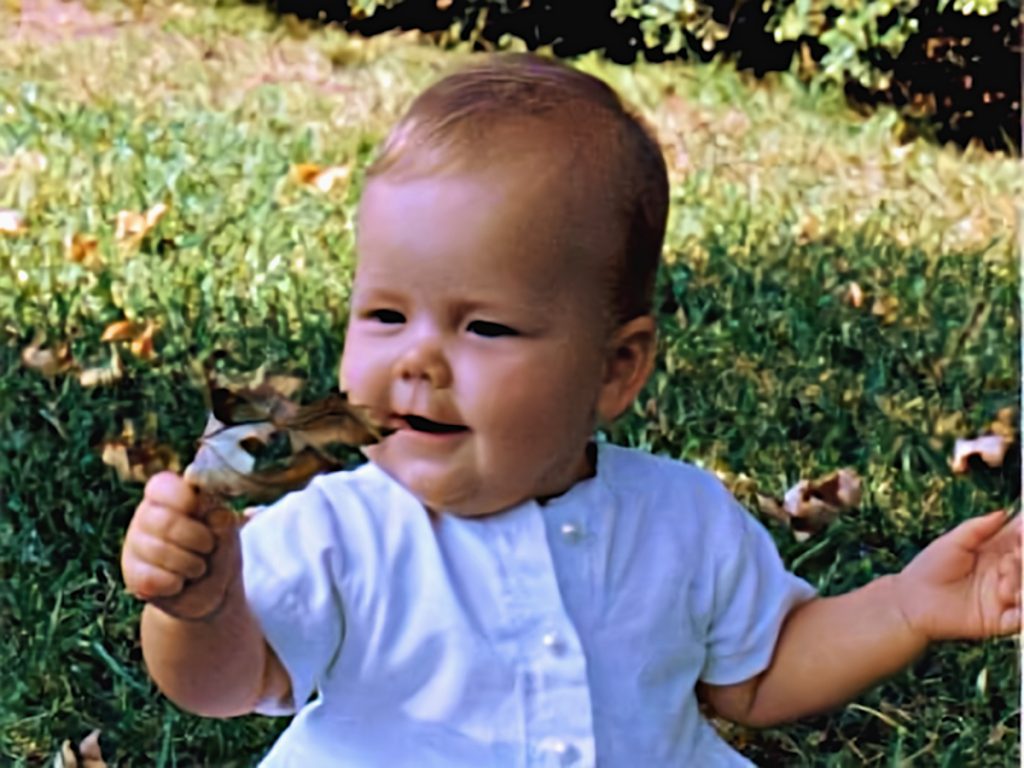 Infants’ Expression — The Art of Becoming

If art is the product of a creative effort, then what art, what effort can be greater than the art of becoming; the creation of the self. All other products (painting, sculpture, music, dance, etc.) are only by-products of the self. Which are the experiences from the beginning of life that eventually culminate in artistic productions? When? How? And, why do we create art? Does dance begin with the feeling of the body in space, the kicking, rolling, stretching, jumping of an infant? Is the crying, cooing, babbling of the infant the forerunner of music? Does the feeling of sand, as the infant runs his fingers through it randomly, create his first design?

After the ‘paradise’ of intrauterine existence and the ‘trauma of birth’ [6], the human infant begins life more helpless than any other living creature. He cannot survive without help, but he has the capacity to elicit help; he can cry. A two-way communication and conditioning begins between the individual and his surroundings. Before the awareness of space and people around him, the newborn lives in an undifferentiated stage with no body boundaries, no awareness of self and non-self, no differentiation between inner needs and satisfaction coming from the outside. This ‘narcissistic’ [3]  or omnipotent autistic stage merges into the next, the symbiotic phase, when the child ‘includes mother into his omnipotent orbit’ [4]. As his motility, skills and interest grow, his curiosity and the pleasure in discovery help him to leave the need-fulfilling object, the secure base; the mother. Separation-individuation begins. The struggle towards autonomy and eventually identity is the real and most important task of a child or any human being.

At any age in a human’s life there is a struggle between security and venture. It is indeed a lifelong struggle playing a part in all decisions. The struggle between the ‘holding-on’ and ‘letting-go’, the ‘old’ and the ‘new’, the ‘known’ and the ‘unknown’ leads from utter dependence to self-reliance and independence, from the ties of the umbilical cord to the liberation from the forces of gravity, from Mother Earth to the flight to the moon.

To use MASLOW’s [5] simplified model, the person is between safety and growth. PIAGET says ‘space increases for an infant as far as the arm can reach’ (tactile), ‘the eye can reach’ (visual) ‘imagination can reach’ (the moon). The expanding of the self into the universe is the art of growing, the art of becoming.

As we observe healthy infants they show genuine delight in looking around, mouthing, touching, feeling, banging, throwing, transferring objects and later using objects to build increasingly more complicated designs. The infant explores space with his whole body in ever-growing patterns, from turning the eyes, the head, the trunk, to rolling, pivoting, crawling, creeping, kneeling, climbing, standing, walking, running. He meets difficulties, frustrations, yet the joy of mastery in every situation inundates and drives him to the next unknown, unexperienced, unattainable, until he masters it again, thus producing the happy circle or rather upward spiral of expansion, growth, mastery. Why does it not always happen that way? Why does the growth spiral run into the vicious circle of stagnation or spiraling downward into regression? Leaving out the special difficulties due to organic, metabolic, or functional problems, let us concern ourselves with the vicissitudes of normal development.

The broader scope of our Infant Project at the Dubnoff School for Educational Therapy in Los Angeles is to help normal as well as distressed infants and their parents by detecting and possibly preventing or correcting early deviant development. Within this broader scope of the project, the observation of the infants’ self-expression led to the study of the art of growing and the art of becoming.

In 1969, we selected a small group of infants from six months of age, some of whom exhibited ‘high-risk’ signs and others who appeared to be developing normally. Starting with six-month-olds is not to deny the importance of the younger months. It is felt, however, to be the optimal age for observing the emerging personality of the child.

Our setting and procedures are designed to facilitate free choices between mother and autonomy (security vs. growth). Part of the Infant Center consists of a small observation room leading to a narrow corridor which opens into an infant room divided into two parts by a fence with an open gate to the yard.  Most of the attractive toys are in the fenced-padded area. The mothers put the infants down in the infant room. The infants have the choice of: (1) Moving into the play area (where they can explore alone or with other infants); (2) or, into the observation room (where the mothers are); (3) or, even outside into the fenced-in yard.

The following cases illustrate our observations on the Art and Vicissitudes of Growth and of ‘Becoming’.

Case 1. Mike. Mike is 13 months old. He is the only child of a young very intelligent couple. Both parents are sensitive to, and actively involved in, his development. They both were Montessori trained and believe in letting a child explore and learn autonomously. Mother is a full-time housewife.

When speaking about separation, object relations, dependency and ‘attachment’ [1], we always include mothers’ needs in these areas as well as those of the infants. We try to detect the covert messages beneath overt behavior (e.g. mothers complaining about clinging infants, yet making clinging attractive, while making separation threatening). We see this two-way struggle between Mike and his mother. While she verbally complains about Mike’s clinging behavior, her body is always available, sitting on the floor ready for nesting or rather melting in. They both delight in bodily contact. Even when mother is engaged in conversation with adults, her arms gently touch, embrace, Mike every time he approaches. Mike uses the mother’s body as home base to climb on, to cuddle into.

Mike can be very happy and very unhappy. When mother removes her body, he is inconsolable, keeps crying with big tears, does not accept any substitute. Just seeing her or hearing her is not enough.

Should we be concerned about the strength of this mutual attachment? I do not think so, because, whereas Mike does not accept to be left by his mother, he can repeatedly leave her, going outside, or joining other children as long as he can check back, get the magic touch over and over again. MAHLER [4] writes about ‘normal symbiosis’: ‘The more nearly optimal the symbiosis, the mother’s holding behavior has been, the more the symbiotic partner has helped the infant to become ready to ‘hatch’ from the symbiotic orbit smoothly and gradually – that is without undue strain upon his own resources, the better-equipped has the child become to separate out and to differentiate his self-representations from the hitherto fused symbiotic self-plus-object representations.’ In spite of the above philosophy, we encouraged Mike’s mother to slowly ‘minimize’ the attraction of safety.

Case 2. Ronnie. Ronnie, a 14-month-old only child, has been described by his anxious mother as ‘hyperactive’, and restless. We found Ronnie an interested, curious, exploring child and found his mother to be hyperactive. Mother reassumed part-time teaching in a nursery school when Ronnie was nine months old.

Ronnie, like Mike, was crying when mother left him, but something around him quickly caught his attention and he became absorbed in play. Ronnie’s interaction with his mother was on a more mature level; he’s like to bring mother his favorite toys, or look at her as if sharing with her some of his triumphs and achievements (e.g. freeing a caught toy, reaching for and getting an object, etc.) As some time elapsed, his mother has gained more self-confidence, she became more relaxed; she no longer feels the need to interfere in Ronnie’s activities. She can enjoy just watching him, thus allowing his self-expression and growth.

Case 3. Randel. While both Mike and Ronnie express their needs and moods very clearly we have great difficulty in understanding and, therefore, reacting to Randel’s cues. Randel is a 10-month-old only child of intelligent, concerned parents; both are trained Montessori teachers; mother has not been working since Randel’s birth. Most of the time Randel conveys discomfort. It seems as if she were in a state of indecision. For instance, she would appear to be sleepy but caught in an uncomfortable position, not being able to let go. Even her movements convey this neither-nor stage of mind and body. She cannot even make up her own mind which thumb to suck. She creeps slowly, almost tentatively, is only slightly attracted to objects, and leaves them when reaching involves some effort. Randel cries a great deal, very strongly but intermittently. It starts and stops with no apparent reason and it sounds undifferentiated. She is less distressed when mother is around, but not absorbed in play or really content with mother either.

We have been speculating about the causes of Randel’s uninvolved behavior. Could it be caused by her mother who reacts to her crying in a somewhat undifferentiated matter, just giving her a bottle of milk most of the time, or could it be that Randel has not yet developed her own tempo, rhythm, and style, because she had to adjust to her parents’ tempo, rhythm, and style? She has been awakened, put to sleep, fed, played with, according to their schedule, not to her own. It was necessary to help Randel to become aware of her true needs, to discover and use her own resources and/or to communicate her needs. Simultaneously, the parents had to learn to understand her cues and respond to them selectively.

Each of the above-described infants show unique ways, coping devices, styles of expression as they go towards maturity through separation from mother.

Change and growth never happen as fast as during infancy and early childhood. If it could be captured with time-lapse motion, the personality of a child would unfold (in front of our eyes) as fast as bud blossoms into flower. We could witness the Art of Becoming: the infant’s way of perceiving his environment, responding to it and thereby changing it; the space he occupies, the role he plays, the unique contribution he makes in the world is his art.

If he meant to become an artist in the common use of the word, he might express through some media true art. ‘It is the business of art to grasp the primordial truth, to make the inaudible audible, to enunciate the primordial word, to reproduce the primordial images – or it is not art’ [2].

A brief review of theories of infant development precedes the description of three cases. The observation of the infant’s spontaneous behavior, their choices between the security of mother’s presence and ventures towards objects in the environment shows the very individual pattern of maturation and development of each infant. This is their expression of the Art of Growth and their Art of Becoming.

The author speculates how some experiences in infancy become the forerunners of art, While others become distorted and serve psychopathology.