Off Again, On Again

What is Appropriate Curriculum for Infants and Toddlers?

Infants’ Expression — The Art of Becoming 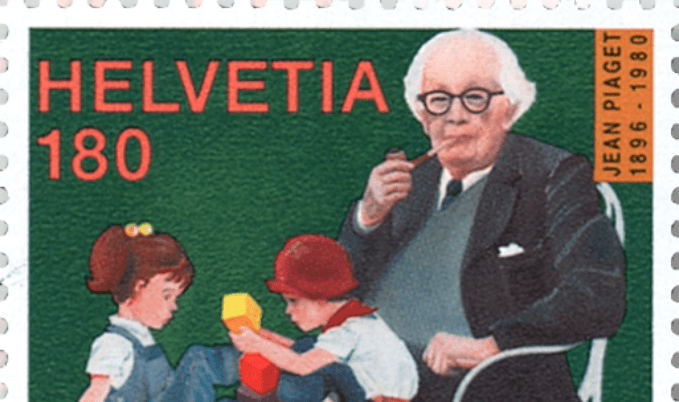 Piagetian Theory and the RIE Approach

I would like to begin by quoting a beautiful statement made by my compatriot, Nobel prize-winning chemist Dr. Albert Szent-Gyorgyi, who said, “A discoverer is a person who sees what everybody sees and thinks what nobody thought before.” Although other fathers have observed their children, and have written their observations in diaries, Piaget was able to develop a whole system of thinking about cognitive processes from his observations.

My own introduction to Piaget occurred when I was a college student in Hungary. In Hungary, one could not pass through any department of early childhood education without studying Piaget’s theory. All of us who did felt pure Piagetian courses to be the most difficult; we had to learn Piaget’s special language and the meaning behind it.

I came to the United States in 1957. Shortly after my arrival, I was very excited to hear that Piaget himself would be giving a workshop in Los Angeles. I was unable, however, to convince my educator colleagues of the importance of the event. To my extreme disappointment, no more than 20 people attended the workshop. That situation has since changed, of course. Now one can’t write any article on child development without referring to Piaget.

I recall another event in (I believe) Washington D.C. when Piaget was the main speaker at an NAEYC conference to which hundreds of people came. He lectured in French –- I was fortunate to be able to understand him in that language. It was revealing to hear the questions put to him after his lecture. Most of the questions, although asked in different ways, basically centered around delays in sequences in development, and how can we then speed up the process? Piaget’s answers were polite, but his inner smile gave away his thoughts. He said that speed was not his concern; he focused on what was happening and how, and hadn’t given much thought to the implications of his findings for education.

It is here I would like to talk about some of the similarities between Piaget’s thinking and our own at Resources for Infant Educators (RIE). First of all, both approaches are developmental – being much less interested in results than the actual process of getting from one milestone to the other. We are both interested in epistemology – or how knowledge is obtained. While working at Binet’s lab school in Paris, Piaget became fascinated by the children’s incorrect responses. From the nature of these responses, he was able to understand their thinking processes. And like Piaget, we at RIE believe that biological growth parallels intellectual growth.

Secondly, both Piaget and I see everything infants do as a purposeful learning activity. While others see only a child climbing on a chair, we can see how this act relates to the ongoing learning process. For example, Piaget would present to a baby a stimulus such as a swinging pocket watch and then carefully examine the baby’s reaction. At RIE, we set up the environment with given stimuli and try as much as possible not to interfere in what the infant chooses from among the available items, or in how and for how long she chooses to manipulate them. We believe this is optimal learning.

McVicker Hunt described that problem in teaching wherein the new is suited to the already known as the ‘problem of the match.’ The discrepancy and knowledge may be too wide, or it may be too close, which is unchallenging to the infant. Hunt saw this as an unresolved dilemma in education. Neither Piaget nor I see it as such. In our view, the infant is perfectly capable of problem-solving. But it’s a problem for adults, parents, and educators who have great trouble accepting that whatever the infant chooses to do is in itself optimal learning. They cannot separate learning from teaching. From what I have seen, it appears that teachers have a need to teach and only feel satisfied when the students are learning what they teach.

I think the most important similarity that RIE and Piaget share is that our understanding of children is based on continued open-minded sensitive observation. While knowledge of existing child development theories is important if well-used, it can become a handicap. I’ve personally observed situations in which someone tried to fit the infants’ behavior into a theory. Such a person sees what is going on in the back of his eyes rather than what is happening in front of them. We need to adopt an attitude of something I call ‘empathetic curiosity’— the desire to perceive and thus to understand the other’s point of view. Understanding leads to acceptance which then furthers respect. That layer of being which is one’s authentic self communicates with the authentic self of the other.

Piaget was an observer and a scientist — creating scientific structures including language. He didn’t unconsciously apply his findings or give ‘how to’ instructions. RIE does. We have developed a methodology which enables us to apply our philosophy — demonstrating what you do and don’t do in order to achieve the philosophy’s objectives. So many people want to apply Piaget to their problems, which they then called ‘Piagetian-based’. Places that use Piagetian-based curricula may be violating the whole Piagetian mentality and approach.  I recall that NAEYC conference at which Piaget answered those questions with his smile that was more French than Swiss. I wanted to answer those people — to say emphatically, “Hey you guys! How can you observe children naturally if you impose a curriculum?” The standard example of such an imposition is the exercises for teaching object permanence. An analogy in infant care is the mistake made with regard to gross motor development. We often set babies in sitting positions before they are ready. When they’re ready to sit, they’ll sit without our help or teaching! To teach a child to sit up or to learn object permanence is to not accept where he is in his life. This is the greatest Injustice we can do to anyone. We give lip service to fostering self-esteem, yet how can someone feel worthy if what he is doing is not good enough — If he must perform? Nothing could be more incongruent with Piagetian concepts.

I believe that RIE, with its attitude of ‘empathetic curiosity’, is closer to Piaget than are most programs which carry his name. In our parent-infant classes, and in our training programs for professionals, we seek to implement a philosophy based on sensitive observation and selective intervention (knowing how to understand and respond appropriately to the infant’s cues). We would warmly welcome Piagetian scholars to come to RIE and do a more scientific study of our methods and their relevance to Piaget.